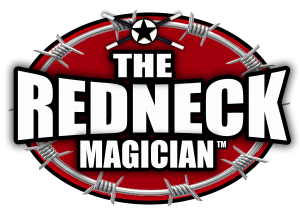 As seen in Branson Missouri since 2006!  The Redneck Magician

Christopher James can be seen performing as The Redneck Magician around the world.   This unique take on magic offers family friendly magic and comedy for your next event.  Redneck comedy and magic that is not offensive and shows the creativity that Christopher is known for.

In Branson, MO since 2006, Christopher was named the Male Performer of the Year by Branson Show Awards.

He recently released a few videos from his Redneck Magician character that can be seen bellow.  Y’all Enjoy.